The movie centers on the story of Herschel Greenbaum (played by Rogen), a Jewish immigrant who is accidentally preserved for 100 years in a vat of pickle brine, only to be discovered in 2020 Brooklyn. His one living descendant, Ben Greenbaum (ALSO played by Rogen) takes him in. Through a hilarious series of events, they learn that despite the difference 100 years can make, family is still the most important thing.

Ian was originally cast as Rogen's "acting double". Since he is acting across from himself for the majority of the film, Seth insisted he wanted a good actor to work across from, someone who was capable of keeping up, and of course, improvising with. That's where Ian came in. The amazing hair and makeup team transformed Ian into "Ben" when Seth was playing "Herschel" and vice versa.

Ian made such a good impression on Seth, Simon, and first-time director Brandon Trost, that they offered him a supporting role in the film as well, playing "Devon", one of Ben Greenbaum's communal workspace-mates, letting him improvise much of his dialogue. 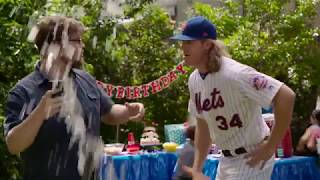 Check out Ian with Noah Syndergaard in this DELTA Airlines Spot!

Ian in The Focus Group's TELL US SOMETHING

Ian in The Focus Group's WHAT REALLY HAPPENS AT AA MEETINGS